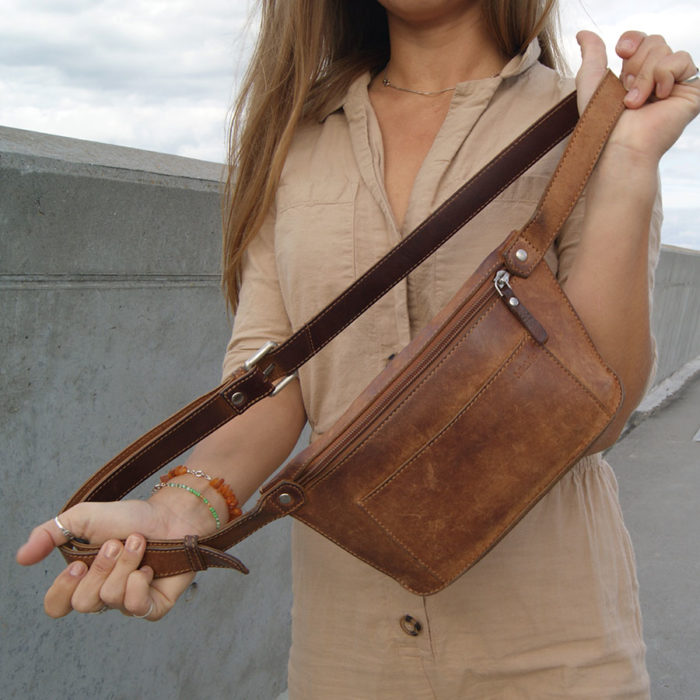 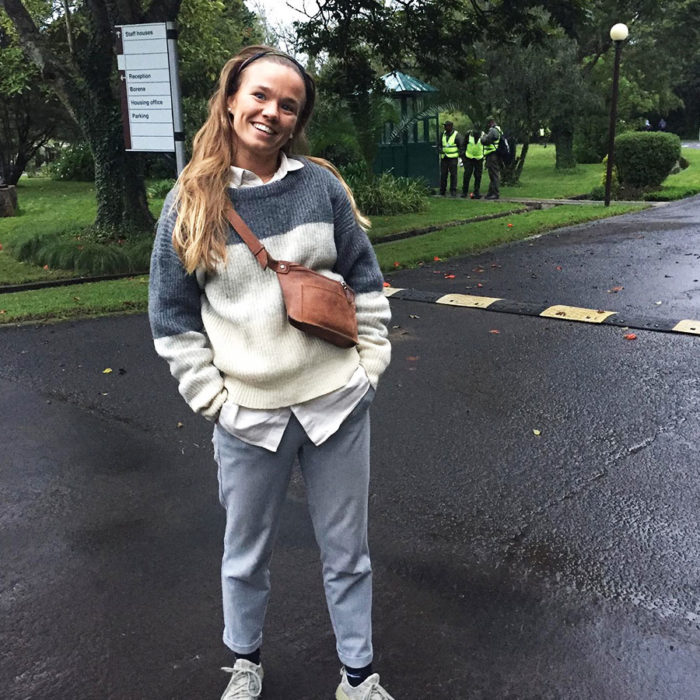 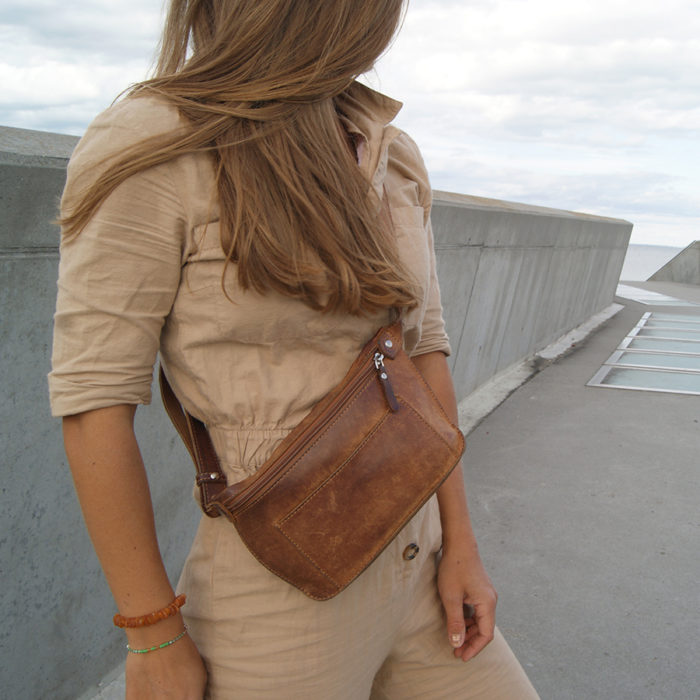 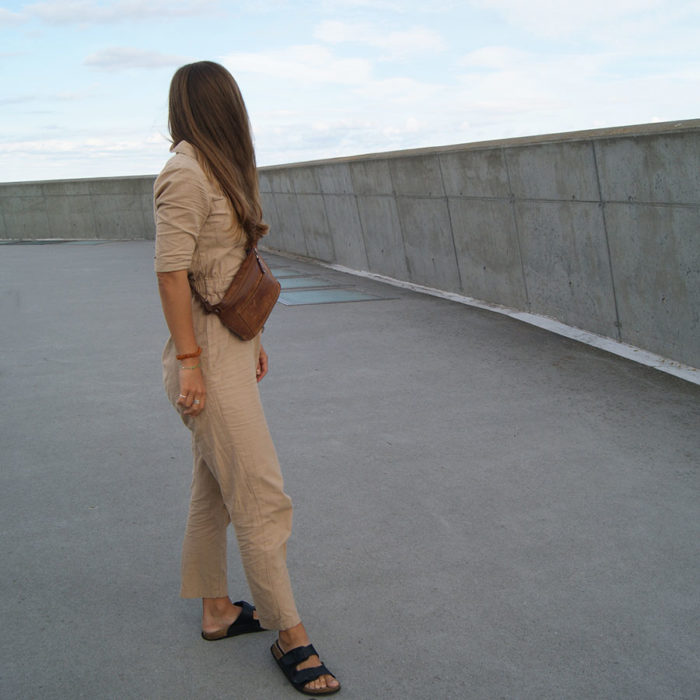 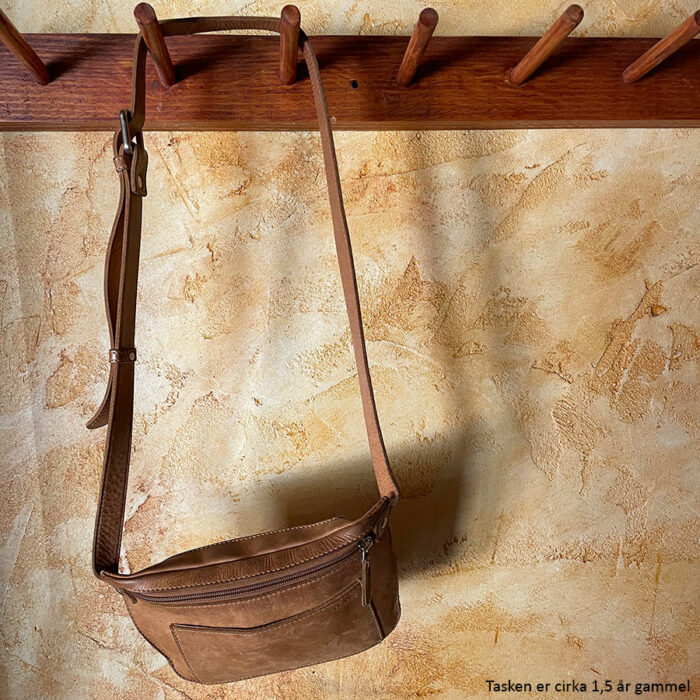 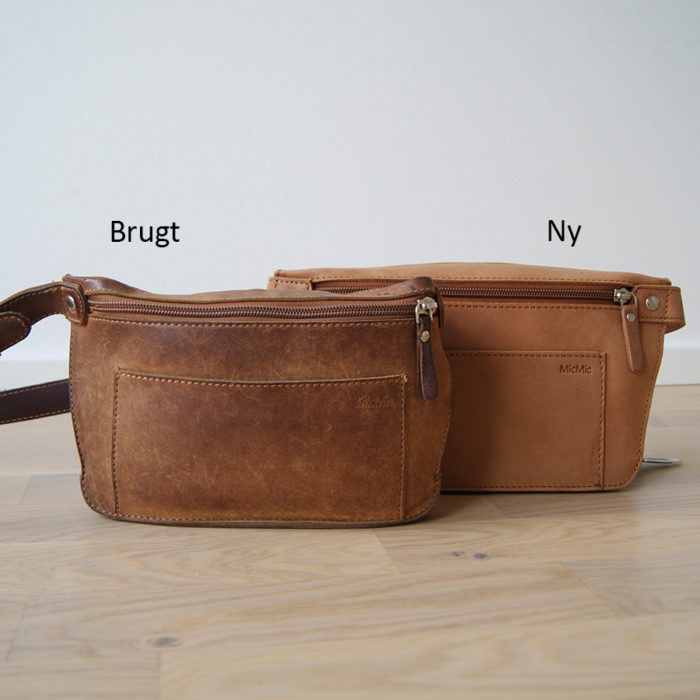 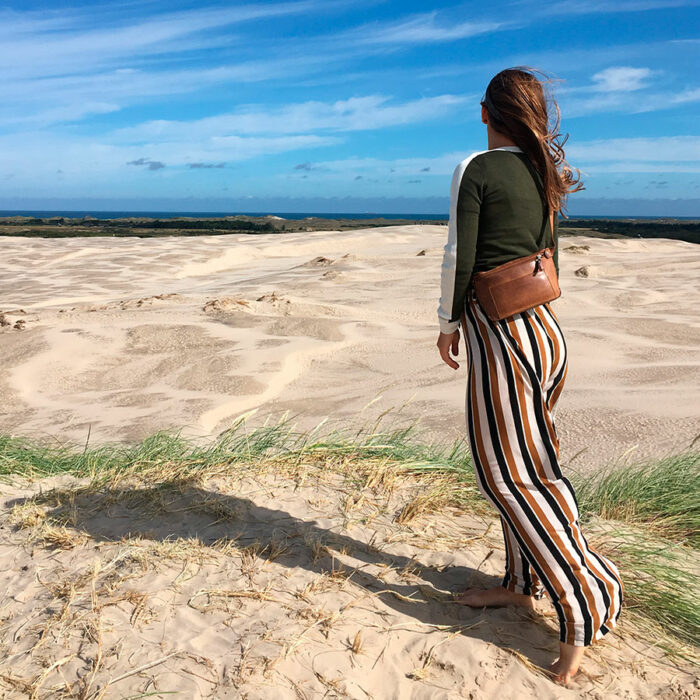 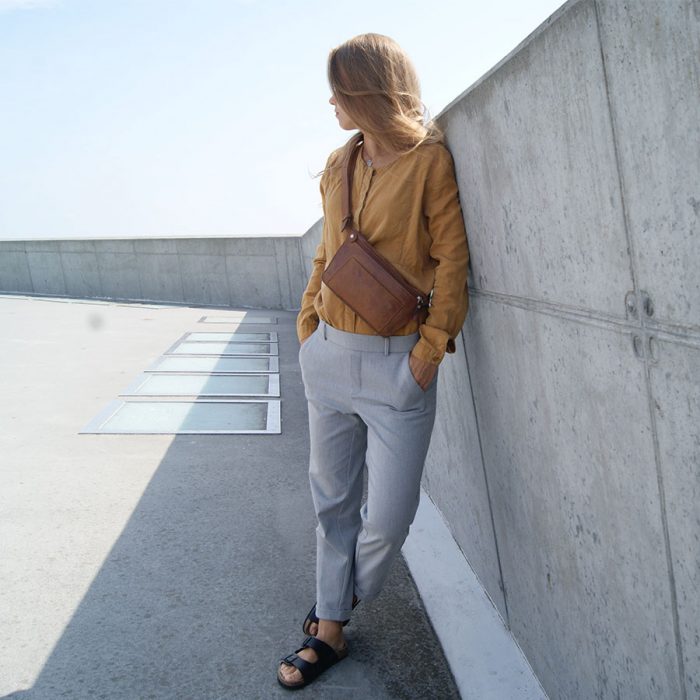 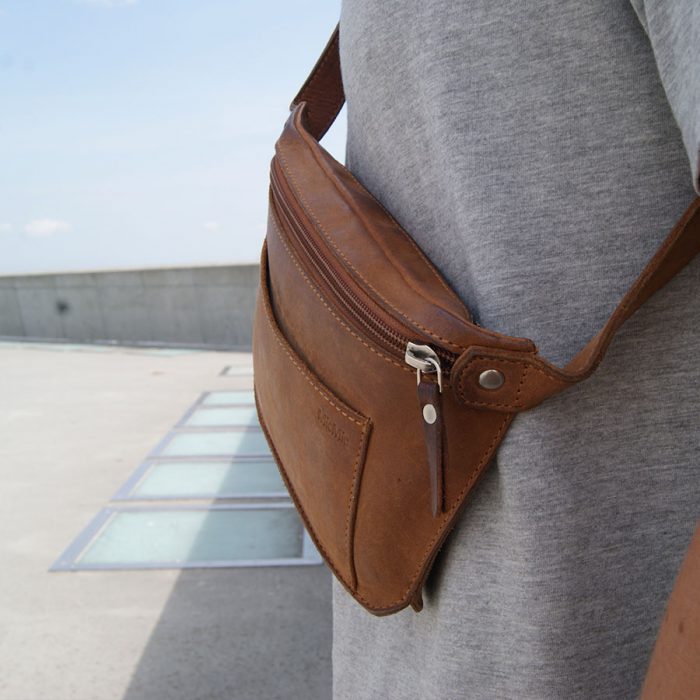 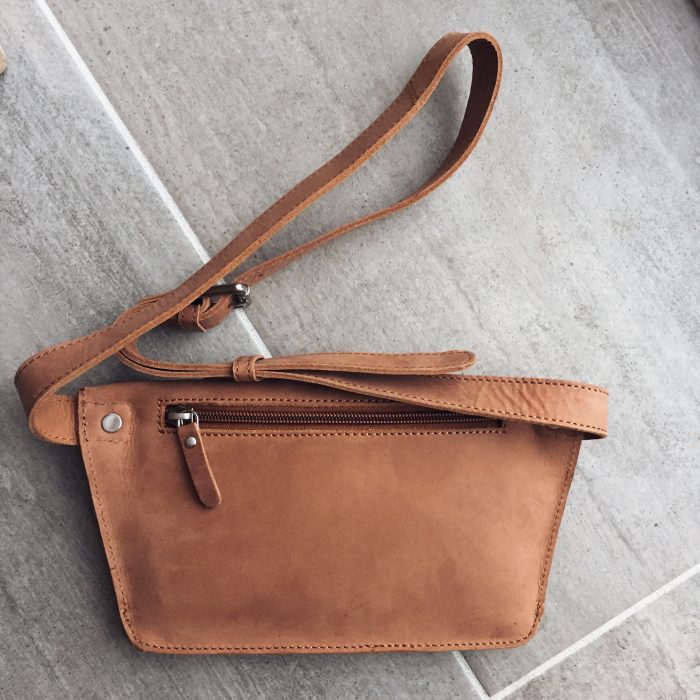 The belt bag is perfect for everyday life, but can also be used for travel, festivals and much more.
With this bag, you can have your belongings close to your body, while keeping your hands completely free. The bag can withstand all kinds of weather - in fact, the leather only gets nicer from being used, as it gets a nice patina.

From new, the belt bag is light brown. Over time, it will develop a nice patina (which makes it darker) so that it looks like the belt bag in the pictures. This is between 1-1.5 years old.

In the belt bag there are two compartments. In the large room with zipper, there is room for mobile, purse, keys and a little extra like a lip balm or smaller make-up.
There is also a compartment with a zipper on the inside, towards the body. This is good for money, passports or other values. Inside, they are well secured against others a little too curious hands.

A new Siem belt bag is slim, but if you want more width (as in the pictures), it just needs to be filled up well from the start. Then the bottom will unfold and the bag will quickly get a new, wider shape. In addition, the bag will shape itself to the body.
In the picture in front of the lawn, it can be seen how the bottom of the bag is unfolded (the width).

The leather on the belt bag

This bag is sewn in high quality leather from India. The leather is tanned without the use of chromium, heavy metals, formaldehyde, chlorinated paraffins, azo dyes and a variety of other chemicals.
The bag is sewn at an SA8000 certified factory. The certification is one of the most recognized international standards of social responsibility.
Read more about the bags from India right here.

The bag is also available in black leather right here.

Belt bag for men and women

This leather belt bag for men and women has a rustic look that can be combined with a shirt or a dress. That's why it's unisex - and I sincerely think it suits both women and men really well!

Bumbags leather, Siem - About the name

The fine Siem bumbags leather belt bag is named after the extraordinary city of Siem Reap in Cambodia.

The city is located in the North-West of the country, and is known for the Angkor area that is on today UNESCO World Heritage List. Angkor, meaning capital, was the capital of the Khmer Empire from the 9th to the 15th centuries.

I have been there 3-4 times, both as a child when I lived in Cambodia, but also in 2016 with my boyfriend. The city is definitely worth a visit, even though you may feel like you have seen enough temples on your Asia trip.

A belt bag named after the world's largest city - at the time.

In its heyday, Angkor was the world's largest city! Not only that, the city had an extensive infrastructure that connected the over 1000 square kilometers - and the center of the capital was a sea of lavish temples. Angkor today testifies to a wildly fascinating and talented population.

Some of the temples today are just a few tossed bricks, while others stand in their full, impressive height - i.a. the best preserved and most famous Angkor Wat.
All the temples are adorned with detail-oriented engravings of religious tales, devas (kind deities), asuras (demonic deities) and apsara (nymphs).
And as if that were not wild enough, over the many centuries giant trees have grown under, over and through many of the temples!
It certainly does not make this journey to the past less fascinating, and as Lonely Planet writes, it really is a “gateway to an ancient world”.

The Angkor Wat Temple is also seen in the middle of the Cambodian flag - and I can well understand that they are proud of what is today seen as Cambodia's architectural highlight!

But let’s just say it like it is: I am not the first to look past.
Every year about 2 million people visit the area! There are insanely many.
Although there are of course many tourists - most at the famous temples - the area must be on your to-see bucket list! Therefore, I also chose that this belt bag in leather for men and women, should be named after the area.

Be the first to review “Bumbag læder, Siem i lysebrun” Cancel reply