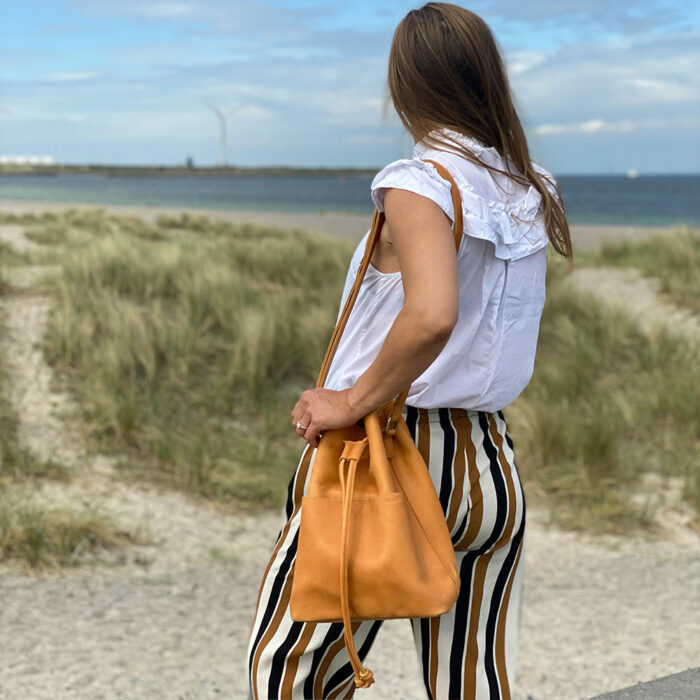 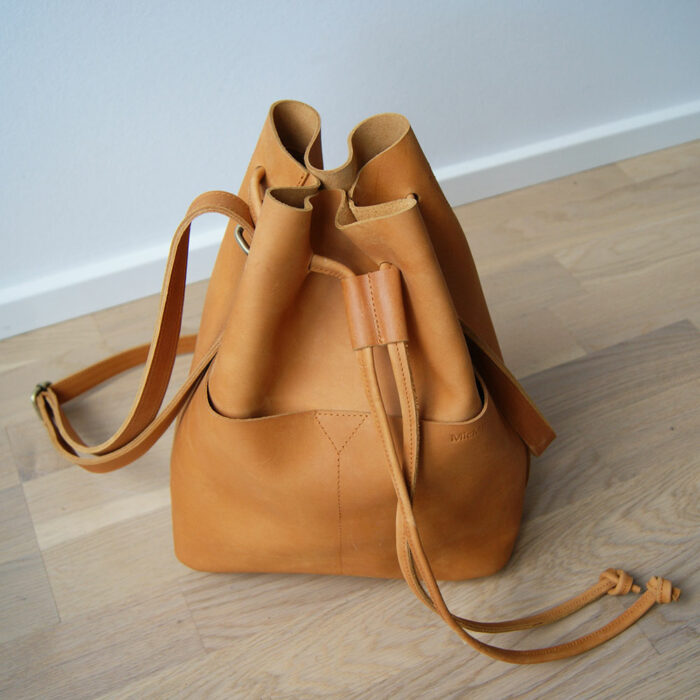 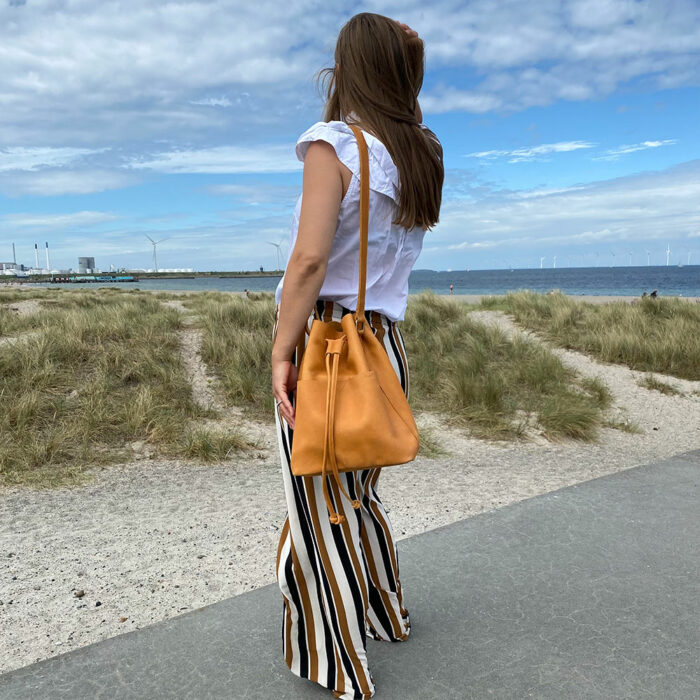 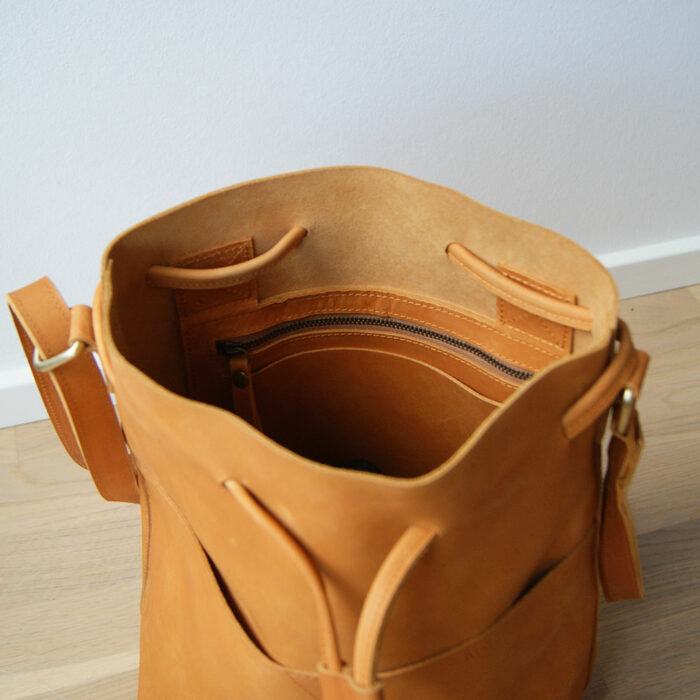 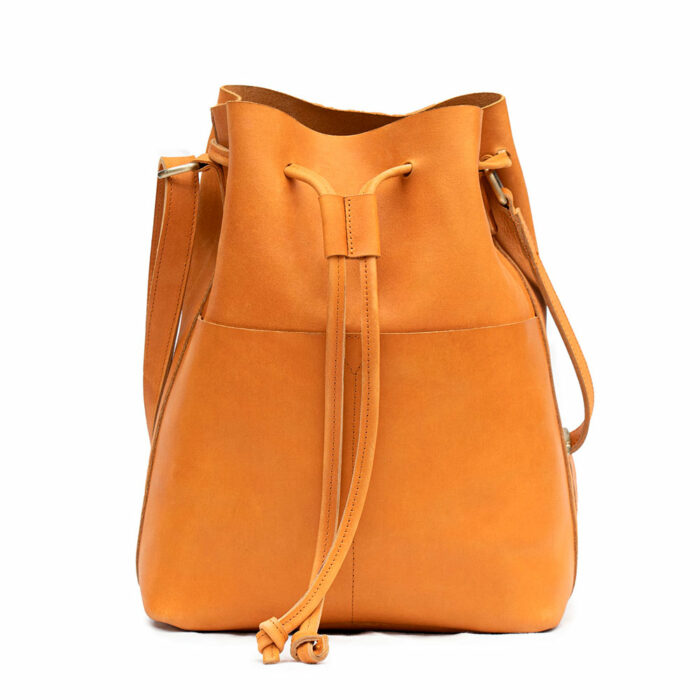 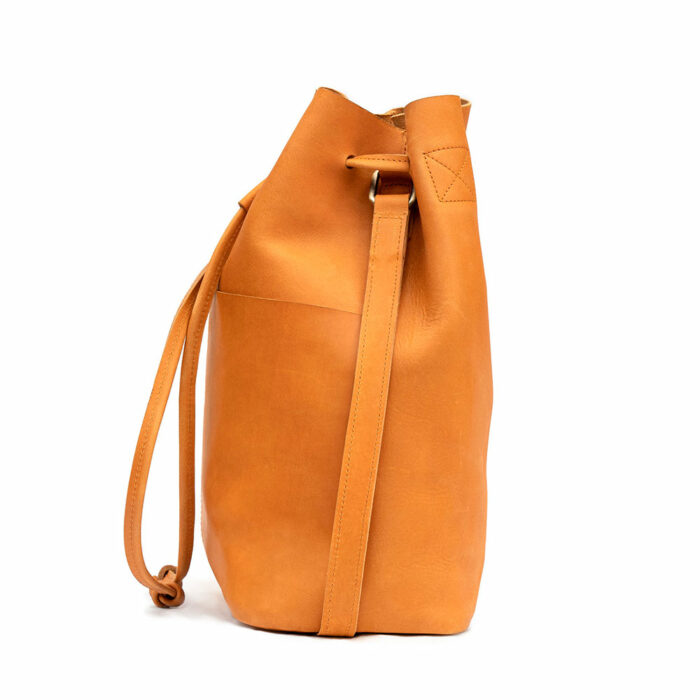 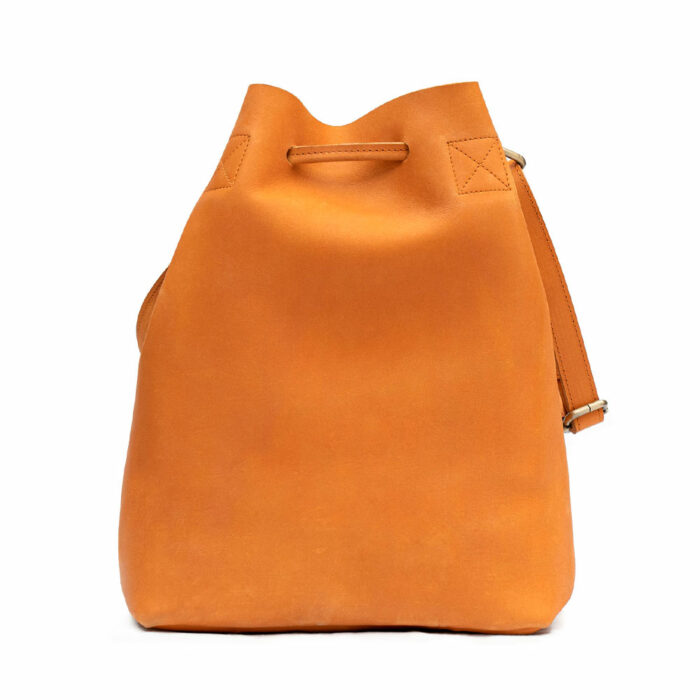 The bag here can be used as a knitting bag, project bag, everyday bag or for exactly what you want.
The spacious shape means that the bag can be used for everything from yarn keys to the party where you need to bring an extra sweater.

The bag consists of a large compartment and a smaller pocket with a zipper for e.g. mobile and keys.
The strap on the bag is adjustable, so you get exactly the length that suits you.

Watch me show the bag on video right here.

The project bag is also available in black, olive, true and brown.

Knitting bag / project bag in leather - About the name.

The knit bag, or project bag, is named after a city in the central highlands of Sri Lanka.
In fact, the Sinhalese word for hill is "kanda" and hence the city's name "Kandy".
Kandy is located 500 meters above sea level, and in addition to resulting in a fantastically pleasant climate, it also means that the city is a nightmare to get to - at least if you do not like mountain driving. If, on the other hand, one can disregard the many needle turns, the trip to (and from) the city offers the earth's most beautiful mountain landscapes. I chose, quite impulsively, to take the four-hour trip to the city in a TukTuk. This way, I avoided seeing nature through a pane, and at the same time it allowed me to stop exactly where I wanted along the way.

Sri Lanka, formerly Ceylon, is the world's fourth largest producer of tea. Maybe you know Ceylon tea?
I have been told that the plants are doing really well in the highlands, where there is a humid and slightly cooler environment. In fact, there are more than 1 million people living off the tea plantations in the country, which is why it is also an absolutely essential export product for Sri Lanka.
On my trip through the mountains, it was impossible to overlook the beautiful slopes covered by small, fine tea plants. In several places, the farmers were out to pick the leaves, which are subsequently sold, dried and made into a myriad of tea blends.

In the 16th century, Kandy was the capital of the country and hosted several great kings, but also periods of colonization by the Dutch and the Portuguese. Walking along the main street, the gaze quickly falls on the older buildings that were built during the colonial era. They are beautiful, but of course very different from the Indian style that Sri Lanka is very much characterized by.

Kandy is also a religious center of Buddhism. In fact, one tooth of the Buddha is said to be kept in the Dalada Maligava temple. Therefore, it is also the terminus for many pilgrims and tourists - including myself.
Only three times a day, for 1 hour, is the "Puja" held, where the temple is opened. The ceremony begins with a musical session on large drums, after which the crowd calmly, but eagerly, begins to squeeze into the area where the tooth is stored. Here I could feel the excitement begin to build!
It turned out, however, that the tooth is not visible to the public. Instead, one saw the casket in gold, which the tooth lay inside. Although I did not see the tooth, it was a great experience to be visiting!

My trip to Sri Lanka was marked by many visits to villages and smaller spots, but in Kandy there were cafes, several restaurants, shopping and a market, so a lot of time was also spent lazing around and enjoying the atmosphere.

From Kandy, I took the train on to Ella, and this particular train route is known to be one of the most beautiful routes in the world! You can read more about this right here.

Also find a bag in black, brown, true and olive.

Be the first to review “Taske i læder, Kandy i cognac” Cancel reply